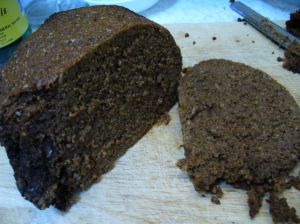 I really think I've got it now! This is most definitely true pumpernickel… I just need to tweak a couple things the next time.

As some of you may recall, I've been trying for, oh, about a year now to make a real loaf of pumpernickel – not what passes for it in the store, but the kind that is sweet/sour, moist, and cooks for hours till the Maillard Reaction turns it black. Back in May, I made some that was pretty close, but the recipe still called for some yeast and some molasses, whereas the traditional pumpernickel I'd gotten from Germany had only rye meal, sourdough, and malted barley. And I knew from my research that the traditional pumpernickel is cooked in a steamy oven for many many hours to allow the reaction to take place. But the couple times I tried that, I got a result that was way too hard to cut into.

With all the general bread-baking experience I've been gaining over the past number of months, I decided I would just try a complete experiment – no recipe, just some learned methods, and a little innovation. Herewith, the one that worked:

I've liked the grain textures I've been getting since May, which is due to scalding the grains first, so that's the first step I took yesterday: I took 1/2 cup of the organic hard winter wheat I have a bag of, and ran it through the coffee grinder to crack most of the grains. Then I mixed that with 1 cup of organic rye meal (still working on the 25-pound sack I bought last Fall), and poured 1-1/2 cup of boiling water over that mixture. I had gotten my sourdough starter out of the fridge the night before (this is the same rye starter I created last Fall – I'm very proud of keeping it going this long – I use it for pancakes and miscellaneous things when I'm not experimenting with pumpernickel, and try to feed it at least every few weeks – I keep it in the fridge between-times). So the starter had come to room temp by Saturday morning, so in a bowl I mixed 2/3 cup of starter, 1/3 cup of lukewarm filtered water, and 1/3 cup rye meal. Then as always to replenish the starter, I added an equal replacement (1/3 cup water & 1/3 cup rye meal) back to the jar. Then I put the bowl of soaking grains, the bowl of sourdough for the bread, and the sourdough jar all into a "turned-off" oven. By that I mean I turn the gas on till the flame starts, and then I turn it off. It makes a nice warm cozy place to ferment or raise bread-y items. Then I went shopping :-) … so it all sat in the oven for 5 hours. I'm pretty sure the time is fairly flexible – here I'm just trying to allow the grains to become soft, and also to get the sourdough to restart its bubbling. I use glass bowls for all these steps, so I can see "inside" when air pockets are forming during the ferment.

Now came a brand new step. I didn't want to add molasses as a sweetener, and darn it the German pumpernickel package said malted barley, and we do have a mini-brewery in our basement after all… so I got 1/3 cup of Al's English 2-row malted barley, and tried to figure out how to extract the sweet bits. It comes still in the husk, so I put it in a Ziploc bag and ran over it with a rolling pin to break the husks. That was marginally successful, but they didn't all break, and the ones that did were just broken, not de-husked. It would take forever to manually husk the grains, so after a few attempts at separating the sweet inner kernel from the chaff, I realized that the malted barley grain would dissolve in water, so I ran the grains through the coffee grinder so they were all broken, and then poured about 1/3 cup of warm water over the broken grains and let it sit for 1/2 hour or so. Then I stirred it around well, and pressed it through a sieve, which gave me a sweet white-ish water, which I figured would do as a sort of barley malt extract. [I think next time I want to work more on getting only the malted barley into my mixture.] So I added that to the soaked grains in the large glass bowl, and mixed in the smaller bowl of sourdough mixture which had started to bubble, and then put the whole thing back in the turned-off oven (after re-lighting it briefly) to ferment. Here I wanted it to become spongy, so I waited 3 hours.

Then to mix it into dough, I added 3 cups of rye meal, 1 cup at a time [I think maybe next time I'll add a little more]. I mixed it till it was what I would call a very thick coarse batter, not really a dough in the way that bread should usually look. I formed it into a ball (it ended up to be about 6" diameter), flattened it just slightly, and wrapped it tightly and completely in a sheet of heavy foil which I had oiled lightly. I had decided to try the idea I'd had last November about cooking it in the crockpot, so I put an inverted bowl in the bottom of the crockpot, and added about 1/2 cup of water (not enough to cover the bowl), and then laid my foil-dough ball on top of the bowl, and turned the crockpot on low. My 27-year-old crockpot only has 2 settings – its Low setting is about 200F, which is just right. Then I let it steam for 18 hours - that is, till lunchtime today. 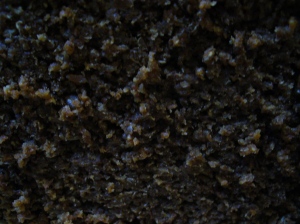 When I took it out and cut it open, this is what I had:

One thought on “aHA”