We (our little ladies' crew + Annie the Post Gazette reporter) left Miss Hattie's house, and drove over to Leslie's house to see how our painters were coming along. They still had some work to do, as having only one tall ladder was limiting their speed. The Camp wasn't really willing to purchase another tall ladder, though, since there are so few 2-story houses there, so that was understandable.

So we headed on back to the camp to get our new assignment. On the way back into Ocean Springs, the drawbridge was up, which was interesting, but even after getting out of the bus and taking a look, we weren't able to figure out why it was up. Nothing passed under it except a pleasure boat, and that was after it was almost back down. All we could guess was that it was an inspection (at 2:00 in the afternoon?)

We figured we would learn the location, then come back and get the guys, and go check out the new house that afternoon so we would know what supplies we needed the next morning. But once we got back to Camp, supplies had already been gathered up for us and we were sent directly to the new jobsite ourselves, to begin work; it was way out in the country (an area called VanCleave) and it was about 3:00 Wednesday afternoon when we got there. 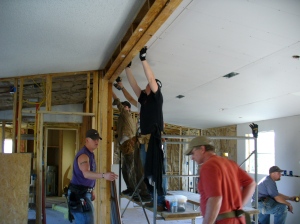 As we drove up to the house, Karen said something like "Oh no, not this house again!" She had worked here on Monday also (before most of our group had arrived in MS), and had spent the day tearing out soaked drywall and insulation, and putting in new insulation (apparently a very messy job). But when we got into the house, we found that a good bit of progress had been made since Monday; there was a crew of men from Wisconsin busily hanging drywall all through the house, and our job was to finish the drywall by "mudding" the screw holes and joints with joint compound. None of us but Danica had ever done that before, but Danica had to leave right away to go pick up the other half of our crew, so she gave us a (very) quick lesson in mudding (which she said she loved to do), and then she left with the bus. So we started working in one of the bedrooms (one of the only rooms which the drywallers had completed at that point). The guys from Wisconsin were very nice and helpful, for example when screws needed re-done, or showing us how to deal with places where the drywall was cracked. One of the first things Rich from Wisconsin told us was to watch out for a guy in a blue & white pickup truck, the crazy ex-boyfriend of the homeowner, who had come and vandalized the repair work in the past. 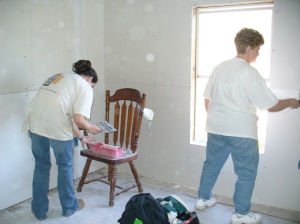 They were ready to leave for the day around 4:00, and asked us whether our bus would be back for us or what. I had just talked to Al on his cell and he said Danica had just arrived there with the bus, so they would pick us up in another 45 minutes or so, so we just kept working till it really started to get too dark inside the (unelectrified) house to see what we were doing properly. At that point we went outside to wait for our bus; we didn't have to worry about locking up because the doors weren't working yet anyway. We just took the tools with us, and put all the fans and heaters they'd given us into a back closet where we hoped no one would bother them overnight.

We were getting a little nervous with darkness falling and the crazy ex-boyfriend in the backs of our minds (and not really knowing where we were in case we needed to call 911!). Finally around 5:30 the bus showed up with our painters, and the other Moss Point crew (with their door again… it hadn't fit after all that!). Our crew got out and went to see what the job was like, since we would all be going there the next day, and Danica said we did a very good job on our mudding so far :-)   (we had gotten pretty much done with that one bedroom, except for the corner joints which we didn't know how to do yet)

So back to Camp, just in time for dinner again. Meatloaf and mashed potatoes, very yummy.

That evening after dinner, there was a little communion service instead of the normal quick devotions, and that was nice. A pastor from Minnesota did the service and had a brief message, and we sang some hymns we chose from the WOV.

Shower time and a brief time online after that, then our 9:00 organizational meeting, at which our team requested the use of a van for the next day (to save Danica driving all over creation with the bus, our new job being out in the sticks by itself, and also because we'd found that the nearest bathroom was 2 miles away in a gas station / convenience store – the other houses had had working bathrooms but this one didn't yet). Actually, it was a good thing that we did some work at the new house that day, rather than only scoping it out, because then we knew of some things we needed for the next day, such as smaller putty knives (the 8" ones were too big for some of our small hands), water buckets (it had taken me a half hour to clean the mud off the tools in the slop sink when we got back to Camp, almost causing me to miss dinner), and the van. I was so tired I was in bed before lights-out this time.