Thursday morning breakfast was sausage, biscuits, and gravy, so I asked them to hold the gravy, and made a sausage-biscuit sandwich with the aid of some cheese from the lunch table. Also oatmeal as usual. Our team had decided the night before that we would go out for dinner together Thursday night (since we were asked to stay in Friday for dinner to make it to an 8:00 church service), so we told Pastor Larry not to expect us. A house rule at Camp Victor is that each group needs to report by 10:00 that morning how many of their group will be attending dinner or lunch, so the kitchen can plan ahead. Leftover meatloaf from the night before was on the lunch table, so I made myself a meatloaf sandwich, mmm. 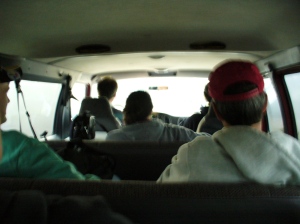 We were able to put together our tools and supplies more quickly this time, since we had a pretty good idea what we needed, and we were able to leave when we were ready. After some discussion about who was the least dangerous behind the wheel of a 15-passenger van, Martin was elected to be the Driver. Or maybe it was just that he was the last one in, and we were already all not sitting in the driver's seat. 🙂 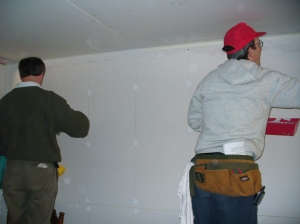 We arrived at the house earlier than the other days (before 8:30), but the Wisconsin group was there even earilier, already hard at it. We got right to work too: I started going back over the work from the day before, scraping off excess mud, and filling sunken holes. Al, Frank, Duane & Martin started on joints and corners, while Karen, Janis and I continued on more screw holes on walls and ceilings. There was another bedroom to do already, and a bathroom, some closets, and some of the living room walls. 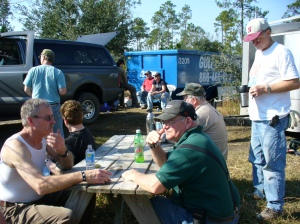 The ladies made a mid-morning bathroom / coffee / snack run to the gas station, for which I drove the van. We made sure to pull our pants up before entering (because the sign said to). At lunch break, Karen (the homeowner) stopped in to see how things were going.

She has lived alone in this double-wide / modular type home for the past 6 years. She said her dad gave her the home, and she saved up to buy the 3 acres of land in the country to put it on. When Katrina hit, there was no flooding in this area (it's miles inland), but the storm damaged her roof badly. She wasn't able to do anything to get it fixed as she didn't have a job due to the hurricane. When she stopped to visit, she was wearing a McDonald's uniform, so I'm not sure if that was her job prior to the storm as well, but I presume it was something similar. She couldn't afford to move out of the house, since a large portion of the rental units on the Gulf Coast were damaged, and those that weren't were charging exorbitant rents (we'd heard this before also). So not knowing what else to do, she stayed in the house. One of the bedrooms wasn't leaking too badly, so she lived there for over a year, while the rest of the house leaked and became more and more ruined around her. Finally, desperate for food, and becoming ill from the damp and mold, she found out about the distribution center and medical clinic at Camp Victor. While there, she was told about the free house clean-out program, and they helped her get into a FEMA trailer park as well, where she's been for the past three months. Actually, there was a FEMA trailer parked in her front yard, but she hadn't yet been given the key to it (something about leveling or final hookups). After over a year of nothing being done about the roof damage, the entire interior had been destroyed by water, mold, and insects, and it had had to be completely gutted, down to the studs, and holes in the floor had to be repaired. Karen was so grateful for the work we were doing; she said her dad would have been so glad to see the house was being fixed back up.

[Note to self for next year: The group from Wisconsin had brought some small Wisconsin gifts and a handmade quilt as a gift to the owner of whatever house they would be working on, so they presented those things to Karen. We thought that was a really nice idea.]

The weather was absolutely gorgeous (more gorgeous than the other gorgeous days), about 70 and so nice and sunny! (see lunch pic)

So… more mudding all afternoon (I think we got pretty darn good at it), till we decided to quit around 4:30 so we could get back a little early to clean up for our big night out on the town.