Our work papers said the house belonged to an elderly woman named Jamie. When we arrived, we met an elderly gentleman who started to show Dave (our fearless leader) where things were left after the last crew, so I guessed that the paper was wrong about the gender of the owner. But as it soon turned out, that was Mr Bob, and the owner's name was really Jane, "as in Tarzan". She's what we all decided was what a Southern Belle was like – very gracious, always looking her best, including flowered hats and all. Mr Bob is the widower of Miss Janie's deceased best friend, and although he lives in Florida, he apparently has been doing handyman type work for Miss Janie for many years. We were never clear even by the end of the week how much of the post-Katrina work on her house he had done, and what had been done by Camp Victor groups (and it seemed some other contractor had been involved at some point as well).

Her house sits right on a bayou, with a gorgeous view of marshland for miles, and then the bay in the distance. Unfortunately, I don't seem to have gotten a photo of the scenery. This is a view of the other houses in the neighborhood – a very picturesque area I thought. Beautiful morning, too!

We learned that this area (Gautier) is pronounced go-SHAY by the locals (I would've said go-TYAY, but this is rural Miz'ippi…) 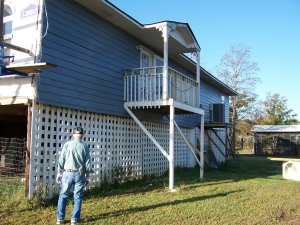 Here are some views of her house as it was when we arrived - as you can see, it's raised, with no living space on the ground level, because the bayou waters often rise even in normal conditions. Miss Janie showed us photos (which I wish I would've tried to photograph) of the house after Katrina. She had evacuated when the storm was coming, and returned 3 days later to find that there had been 4 or 5 feet of water inside the 2nd level of the house, and also that a huge (6' diameter by about 40' long) dredge pipe had washed in from the bay somewhere and had taken out the whole back corner of the house! In the photos she showed us, you could see right from the bathroom, through what used to be a wall to the back bedroom, and out to the bay. In the living room, which has the bow window you can see behind the scaffolding, the bottom of the bow had been busted out, but the windows were still there. Very odd. She said she moved back in at that point, since the kitchen, 2 bedrooms, and 1 bathroom were usable. We were never clear on when the holes in the walls were fixed, but I'm guessing they were at least temporarily patched to keep the weather out for some period of time. I think the major structural repairs had been done by a contractor some time ago, but either they left without doing any of the finish work, or they were fired, not sure what happened there.

Although, at some point while the walls were still open, she bought a jacuzzi from a friend and had it lifted into the bathroom before rebuilding the walls around it. Kind of funny. She says everyone always asks how the heck she got it into that little bathroom. 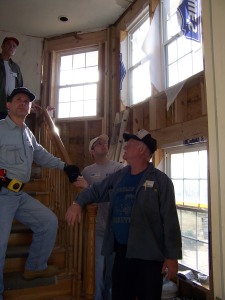 We spent some time assessing what we needed to start on, vs what our paperwork had said. 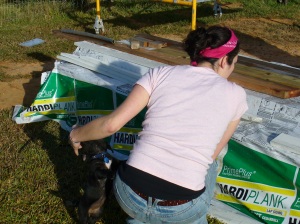 For example, after we read the label on the Hardi-Plank siding, we found it didn't need to be primed at all (it's pre-primed), so we sent Bob 1 to Lowe's with some of the Lowe's cards and a chunk of painted siding to match us some new paint (we had two Bobs on our crew, so we named the one driving the van Bob 1 and the other one Bob 2 – and as opposed to Mister Bob the handyman, haha).

Meanwhile, in the living room, our paperwork had said it was all primed and ready to paint, but it turned out that the previous group had primed over lots of bad drywall/mud work, so our "crack" drywalling crew got right to work fixing it up (which turned out to be a 2-day job just to get it ready to re-prime).