After our walk, we had time to freshen up finally from our bus ride, take showers and a little nap time. Bruce took a photo of the new mural on the front of the building (new since last year, that is. You can see all the other murals here).

Dinner was served at 6:00, as it is every evening. Tonight was a pretty bland (I'm afraid) linguini/cheese dish, cooked carrots, and boston baked beans. Oh, and King Cake, because today is the beginning of Mardi Gras season. No prizes though.

At 7:30 everyone was asked to come back to the dining hall for the general camp orientation. Various staff members spoke to us about different aspects of our week to come, camp rules, and such. I learned later that the one guy – I'm not sure what his position is, but he seems to be in charge of a lot of the general volunteer living coordination – is not on staff but has been a volunteer since September 2005, having left his home and job in Michigan or somewhere to pretty much permanently help with this relief effort (!). Suzie again told her starfish story. A representative from each group stood up to say who they were and where they were from. Our group (Southwestern PA Lutheran Synod) was the largest, with 75, but there was also a large group of Moravians from northeastern PA, a group from Wisconsin, a pretty large college group from Shenandoah University (I think it was) in Virginia, and many others I don't recall.

We learned that the current estimate is that the 3 counties which make up the 80 miles of Mississippi Gulf Coast are approximately only 20% rebuilt at this point, 28 months after the hurricane. About 13,000 families are still in temporary housing in those 3 counties. Many of the relief organizations have closed their volunteer camps at this point, and moved on to other disasters, of which there are always plenty, but Camp Victor plans to remain in operation for at least 5 more years they say. They did say though, that numbers of volunteers and donations have been decreasing, as many people don't realize the level of need that still exists there. But this week they had a pretty full house, about 200 volunteers, I think partly because it was close enough to the holidays that a lot of college kids could come – there were 2 groups I think that were only college kids, and a number of other college / high school kids who came with other groups (like ours). Also still a lot of retirees there as well, and a number of people in our age range who were taking time off of work to do this. A nice variety! One elderly woman was near the beginning of a 3-month stay at camp – she's unable to work on houses, so she stays at camp and helps with cleaning, cooking, and laundry – so there are opportunities for everyone to help in their own way.

They showed us the Chore Board (you can see it in the background), where they were looking for volunteers to help cook breakfasts and dinners each day, clean bathrooms, mop floors, etc. That is, they just needed people to sign up to do that one time during the week. We hadn't done that at all last year, so I decided to sign up to help cook breakfast on Monday – I figured that would be the best day to have to get up early, and then I'd feel good about having a chore out of the way for the week.

After that, our whole Synod group stayed to get our work assignments for the next day, which Pastor Mort & Pastor Sandy had been working on trying to coodinate at least somewhat with our various skill sets. Our little group from Trinity was asked to work together with the group from New Hope (Freedom PA) to work on a house in Gautier which sounded like it needed work in almost every area. So there were 19 on our work crew, way more than last year. We chose Dave from New Hope to be our work crew leader, and based on the paperwork, we decided to sort of split into a painting crew (headed by Eddie, which Nikki, Bruce, Denise, and I volunteered for, along with Janis, who was actually on our crew last year!), a siding crew, and a drywall/mudding crew (which Al & Alex joined). 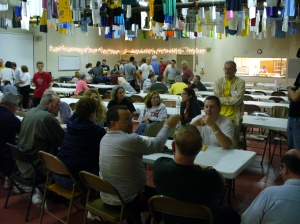 The way it works is that each house has a set of papers that goes with it from week to week, and each crew that works on it is to update what's been done that week, and what's the next thing to do after they're done with it at the end of their week. In theory, that should work pretty well, but we did find last year that it really depended a lot on the point of view of the previous work crew leader, as far as what's "done" and ready for the next step. Anyway, according to the papers on this house, the siding needed primed and painted before being installed, but it sounded like the paint color hadn't been chosen yet, so we figured we'd just get some primer from the warehouse in the morning for that – I spent some time looking up online about priming siding, to see if there was anything we should know, like for example that if we used latex primer, we would have to tell them not to buy oil-based paint. Also, the papers said that the living room and one bedroom were primed and ready to paint, and the paint was at the house, so we figured we just needed rollers, trays and brushes for that. Meanwhile, all the others worked out lists of what tools they thought we'd need based on what the paper said, so that in the morning we could get started right away.

Then to bed, to rest up from our long trip, and to get rested for the hard work ahead… Lights go out at camp at 10:00, ready or not, and all conversations must stop, so people can get the sleep they need. (the dining hall stays open though, for late night conversations, card games or whatnot)