Nikki & I started in on finishing painting in eggshell some interior doors that were laying in the bedroom; last week's group had painted all the trimwork in that room, and the bi-fold closet doors, but there were 2 wooden doors that still needed done (which Mister Bob bragged he'd gotten for $20 each at a clearance sale – meaning we had to scrape off stickers & gunk, and paint over scrapes and scuffs).

But as soon as Bob 1 arrived with the exterior paint, we all started working on that, since the weather was calling for rain tomorrow, so we wanted to get as much done outside as possible today. Some of the new siding had already been installed on the front porch area, so that needed to be painted in situ. Then we started getting out strips of siding and pre-painting them, laying them out on the grass to dry as we went. We figured that way once our "siding crew" was ready to start putting it up, even if it was raining the rest of the week, it would be painted. 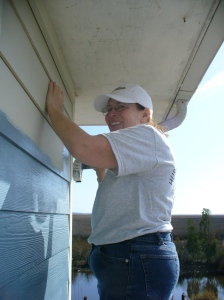 The siding crew got to work removing some of the old siding and trim around the bow window, which had some strange angles to it, and needed some remedial structural work as well, before they could think about re-siding it. 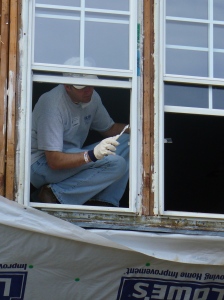 Around noon, a delivery truck arrived from Lowe's, with Miss Janie's new kitchen cabinets which we carried up into the living room (though Mister Bob only accepted some of them because he said they got the order wrong), a big stack of Pergo flooring (unsure where that goes, so we just carried it upstairs), and two pallets full of a beautiful cream-colored ceramic floor tile for the bathroom, bedroom, and kitchen, which we stacked under the house (no more room up in the house till we're ready for it). 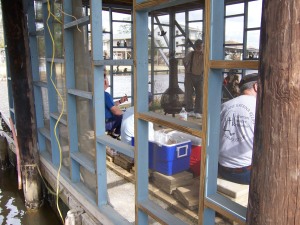 Lunchtime… there's a cool little boathouse where we stored our coolers and ate lunch. Half of it was a dock, with a sling and winch system for lifting a boat out of the water, though we didn't hear whether she had a boat and lost it, or what. Attached to it was a screened-in patio with a tile floor and some tables & chairs, and one of those outdoor fireplace things. The screens needed some work, but otherwise it was a really nice little outdoor living space. From what we could gather, these structures had been damaged by the storm, but were rebuilt by a crew of Mexicans (perhaps the group that initially fixed the house?), until they were frightened away by alligators, which Mister Bob seemed to find hilarious.

After lunch, we started to paint white exterior trimwork, while continuing to paint siding strips. 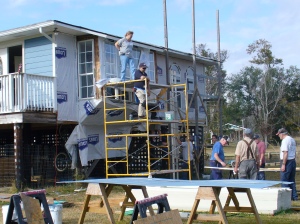 The siding crew continued to struggle with how to work with the bow window, but they also started to cut trim for the other (more normal) windows on that side of the house.

Al, Alex, Bruce and Mike continued to work on patching up the living room walls & ceilings, and the "entry crew" worked on figuring out what materials they needed to get that part of the project going. I think I heard that part of their afternoon was spent dealing with a nest of fire ants they discovered under the front steps.

The 2nd van arrived around 4:00, so we cleaned up our things and put them away for tomorrow, mostly under the house.

Dinner back at camp was a variety of quiches, which were really pretty good. I had Mexican, with salsa & sour cream on top, mmm. After dinner, we met Gregg from PA, and learned (because we asked) about the complete history of the Moravian Church, which we had known nothing about. It was very interesting – they're a relatively very small denomination, but disaster relief is apparently a major focus for them. We attended the little service at 7:00 (really just some singing with guitars), and then dispersed to get showers, etc. They played the BCS Champsionship game on the projector at 8:00 – LSU was pretty much the home team, though there were plenty of Yankees rooting for OSU, for what good it did…   I found that I could access the wireless network from the dining hall (which I couldn't last year), so I sat up and checked emails and posted about the bus trip.