After a delicious breakfast of a sausage pie sort of thing, we packed up and headed out. It had been recommended to us by our hostess’ friend that it would be worthwhile to take a detour and see Dorrigo rainforest, up in the mountains not far south of Sawtell, so we decided to do that. It was still kind of drizzly out, but we figured that might be a good time to walk in a rainforest anyway.

After first touring the exhibits in the Rainforest Centre building, and then walking out the “Skywalk” and viewing mostly fog and mist, we did the 6 km “Wonga Walk”, which took us along a really nice pathway (some boardwalk, some paved) throughout the forest… 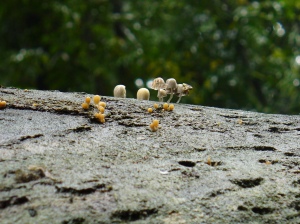 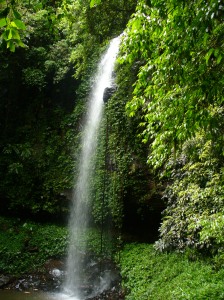 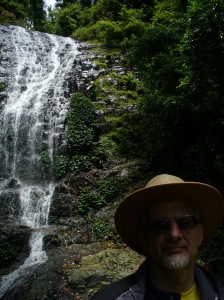 There were two waterfalls along this trail, one (Tristania) is pictured above, and the other (Crystal Shower) you walk behind on the path:

From behind Crystal Shower Falls

At one point, we were quite excited to see a pademelon beside the trail. We stood for quite a while watching it eat leaves before it hopped away. Not the greatest video, but take my word for it that it was really cool to see such an interesting animal in the wild. 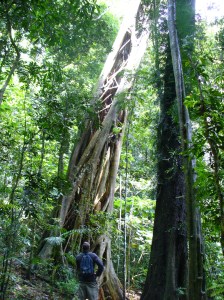 There were a number of trees like the one here, which had been – well – strangled by strangler fig vines. This is one that had been completely enveloped and then the host tree rotted out, leaving a hollow “tree” of vine. 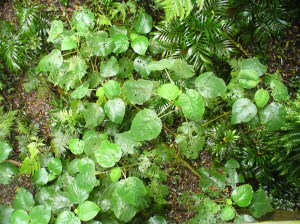 The helpful folks at the visitor center had warned us of two things before we began our walk: First, don’t touch the stinging trees, which we could identify by the large heart-shaped leaves which would be full of holes left by the stinging tree wasp. So were able to avoid those, even the many leaves which littered the trail. 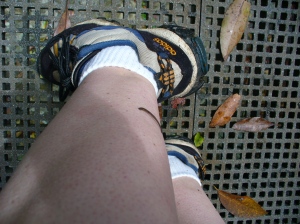 And second, there would be leeches, which had been especially plentiful in the recent damp weather; they said we should just keep an eye out and flick them off. We thought, no worries, we weren’t going in any water (which is where our US leeches live). The first tiny one was discovered on Alex’s finger, and from that point on, we found them pretty often on our shoes and legs. I have no idea how they were getting there, we guess they were in the leaf litter on the trail (once we got on to the less-traveled section), and they must have gotten quickly onto our shoes as we walked by. I wouldn’t have thought leeches could be so agile! Mostly we were able to spot them and flick them before they bit any skin with their suction-y mouths, but one did get Al at the base of his thumb. All part of the adventure!

After our hike, we had some great sandwiches at the Canopy Cafe back at the visitor center. By then the weather had cleared up into a beautiful sunny day, so we enjoyed lunch out on the patio overlooking the rainforest. Very cool.

Then we headed about 3 hours further down the coast, to the Great Lakes region, to our rented house at Smiths Lake. An hour or so along, as we drove down the highway, Alex found a big fat leech on his pantleg, which he threw out the window. Then when I went to kick my shoes off at the house, I saw that both my socks had blood all over the ankles, and when I took them off, I found a big leech bite! Apparently one had gotten under my sock in the forest, and at some point during the drive I had my ankles crossed, and then I must’ve knocked it loose, causing the blood to go all over my socks, and then I guess the big fat engorged leech made its way to the back seat where Alex found it and pitched it out the window. At least that’s how we think it must’ve happened. It didn’t hurt at all, and I had no ill effects, but just pretty weird. Looking at the bite, I can just picture its sucking mouth piercing my skin – *shudder*…