I had found a set of cards at the guesthouse that described walks one could take around Sydney, and before we went out I had chosen several that sounded interesting. One series showed a walk around "The Rocks", which is the oldest part of Sydney, including the oldest house, built in 1816. We figured we could find a good lunch, too, especially since Empress Nasi Goreng had mentioned something about a biergarten-type place in that area… 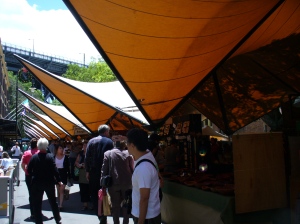 Market at The Rocks 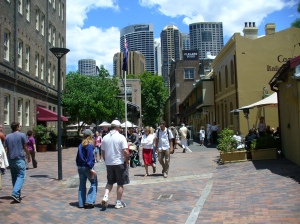 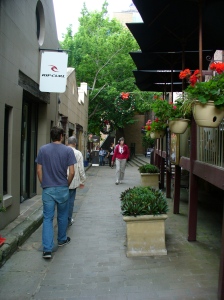 But we followed our designated "walk", which first took us past Cadman's Cottage, and then to the open-air art and crafts market, which we browsed a bit. A lot of the streets are pedestrian-only, cobbled and narrow, and our walk took us up and down several streets that were sets of steps. A very quaint and interesting area.

We saw several restaurants that looked good, but decided on the Gumnut Cafe for lunch, because it's in a historic old house, and has an outdoor area in the back. 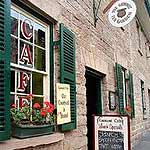 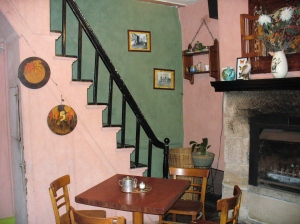 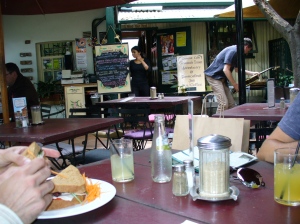 We had some nice sandwiches and aranciatas while we listened to the classical guitarist. The desserts written on the board sounded really good, but we were pretty full after the sandwiches, and also the sky was looking like rain (which it then did), and also it was already around 2:00 and we were planning to have a big dinner out later for our final night in Australia.