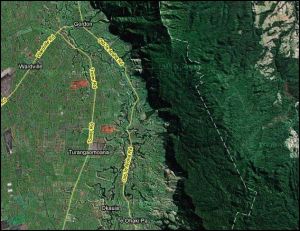 Wednesday morning after our big country breakfast, we drove the few km from the cottage to the Wairere Falls track (the waterfall we could see from our window). The weather was absolutely gorgeous, already t-shirt temperatures by 9:00. When I had first researched this area online, I’d been struck by the unusual topography you can see from this photo from Google, showing the lush Waikato valley to the west, and native bush to the east. Wairere Falls is the highest waterfall on the North Island, and drops 153m over the edge of the 300m escarpment formed by the Okauia Fault, whose line shows dramatically in the satellite photo. 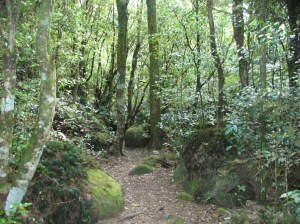 Track through the bush

The track started off through the bush from the carpark, and after about 10 minutes we came to the first bridge across the stream, but there was a sign that the bridges were being renovated in preparation for the summer season, so we would need to ford the stream and take the Maori Track if we wanted to get to the top of the falls. After a bit of discussion, we decided to go for it… we’d had a good breakfast and it was a beautiful day for a good hike before getting in the car for a few hours. 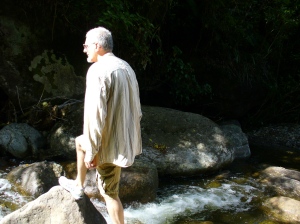 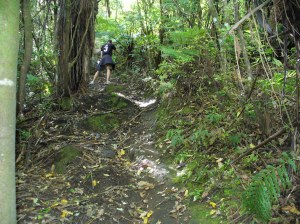 The track wasn’t too bad at first, but soon became extremely steep… steep to the point of needing to grab onto roots and rocks to climb up the path (while hoping that none of the roots and branches were the New Zealand equivalent of poison ivy). The sign at the bottom of the track had said it was 90 minutes to the top of the falls, but what with essentially having to bushwhack, it was more like 2 hours. We were just thankful that it wasn’t too muddy and slippery. 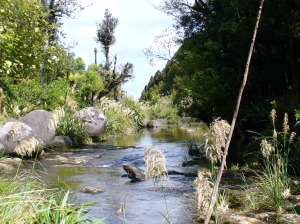 River on the plateau

But finally we arrived hot and exhausted at the stream running across the plateau, very pleasant and calm…  you can see here that the stream is headed toward nothingness.

And here it drops off the edge of the world… 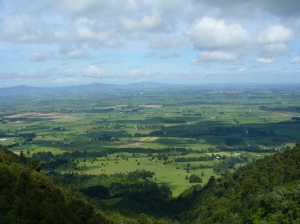 View from the top

There was a nice wooden deck built at the edge of the cliff, so we spent some time there just looking out over the Waikato Plain, watching the shadows of the clouds move across the farmland. We met two fellow hikers at the top (Rachel and Joanna I think their names were), who were from the local area, and we enjoyed talking with them about the other tracks on the plateau. 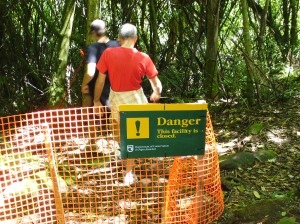 We decided that we didn’t feel like tumbling down the mountain on the Maori Track, and also that we wanted to see the view of the Falls themselves, which were only visible from the observation point along the actual track, so we turned right and went through the construction barricade (shhh!). We figured even if the bridges weren’t crossable, we could probably just ford the stream again as we’d been instructed to do down below. 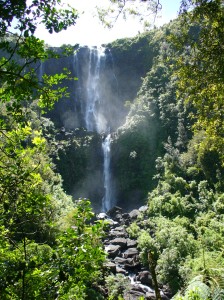 After about 1/2 hour, we were rewarded by this view from the observation point…

Here’s a close-up of the top. 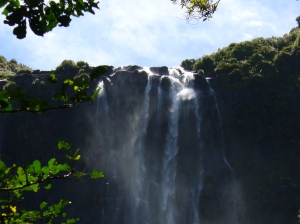 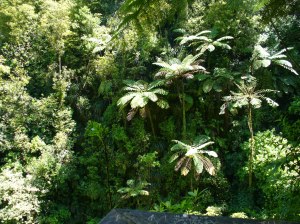 A little further on we came to the first of the bridges that were being reconstructed, and unfortunately it was then late morning so the workers were there. The bridge appeared to be pretty much ready for traffic, they were just putting some final touches on it, so we said what a nice job they were doing and what a lovely track it was, and may we please cross? The worker said “Well, it’s a little late now” (meaning we’d come down the trail about 45 minutes already), and he let us pass. Further yet, we came to another bridge receiving some final work, and we tried the same tack, but this time the worker said it was OK with him, but we’d have to ask the “boss”, who met Al in the middle of the bridge and blocked his way. After some discussion, he grudgingly let us pass, but really if we hadn’t been allowed to cross, it would’ve been a fairly easy matter to cross the stream on the big rocks. We were trying hard not to be jerky American tourists, but we did feel that it was no different from taking our own route through the bush, which wasn’t prohibited. 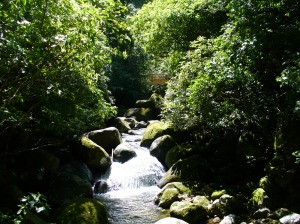 So the total hike was about 4 hours, and well worth it! We felt tired but yet energized, if you know what I mean.

We then drove back to the cottage, changed out of our sweaty clothes, packed up, and headed out after stopping to pay our hosts and thank them for the great stay.

One thought on “Wairere Falls”