So, Google said it would take a little over 10 hours to drive from my house to Salem, Mass. But then after I picked up my niece "I" (this being her 15th-birthday trip) at her dad's house, Lori (my TomTom) said it would be more like 11 hours from there – I forgot that's almost an hour south of me. But in actuality, we made pretty good time through Pennsylvania, weather was mostly clear, just a little overcast; actually better not being so glare-y. Lori took me on a route I'd never been on before to get to NYC; she had us leave the PA turnpike at Carlisle, and go up 78 through Allentown and into New Jersey, then 95 from Newark. By the time we stopped for gas and lunch at a huge Panera in Basking Ridge NJ, we were 1/2 hour ahead of schedule, but then driving around trying to find a restaurant in one of those places that doesn't allow signs, and a non-self-serve gas station, and eating, put us back to an ETA of 6:30, still not bad. 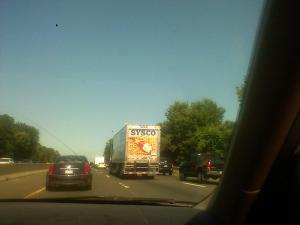 But THEN, we hit the Big Apple. Actually, going through the city around 2:00 wasn't all that bad, but 95 and 81 between there and Hartford, was just awful – it took us 2-1/2 hours to go 60 miles. (The vehicles in this photo aren't moving.) That's what I get for trying to drive through the most densely populated area on the East Coast on a beautiful Friday afternoon. By the time we got through all that, our ETA was 8:00pm. But on the bright side (there's always one of those), that meant we totally missed rush hour in Boston! 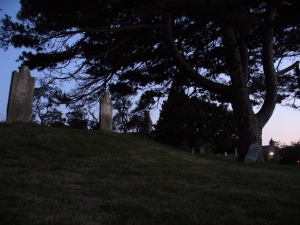 After we were settled into our VERY nice room at the B&B by about 8:30, we got a restaurant recommendation from our hostess, and set out by foot. We passed by an old cemetery on our way, which will likely be a stop on the ghost tour we intend to take at some point this weekend.We got a little turned around in our directions vs the map in the dusk, but ended up in the right place eventually!

We had dinner at The Old Spot, an English-pub style restaurant. I had a really excellent slow-cooked pork roast, with bubble & squeak and wow-wow sauce, and a draught Guinness. My niece had grilled salmon and gnocchi, and she even tried the little clams on the plate! 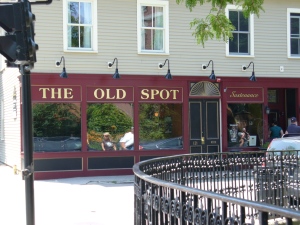 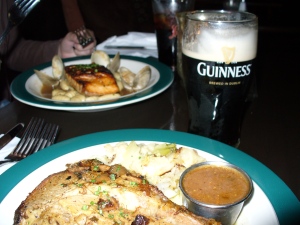 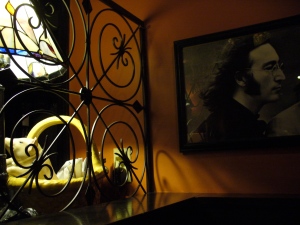 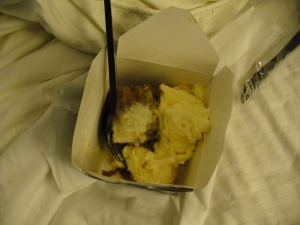 We were too full for dessert just then, but it sounded sooo good, so we got it to go, and ate it back in our room! I got the Spotted Dick, which was their specialty bread pudding with whiskey sauce and ice cream (which they packaged up separately, very good job!), and she had cheesecake with berries. Yum!

Then I tried to read a little, but I succumbed pretty quickly to the coma-inducing combination of the 13-hour drive plus the big meal.

2 thoughts on “Driving to Salem”