Brew at the Zoo

This year, instead of buying tickets for the Big Pour, we decided to go to the Brew at the Zoo (held at the Pittsburgh Zoo), a benefit for the United Mitochondrial Disease Foundation. The event was sold out; I'm not sure how many tickets that meant, but I would say there were at least 1,000 people there. Everyone received a little 4 oz muglet to have filled by the various breweries that had tables set up in each of 5 or 6 plaza areas throughout the zoo. There were bands and food tables at most of the plazas also, to add to the festivities. 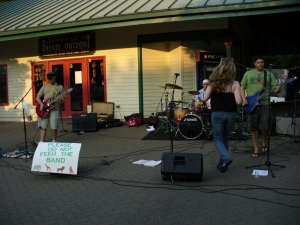 It was a very different zoo experience visiting it at night, when there were no children there, but only adults drinking beer. It was kind of interesting listening to people's observations about the animals. We were a little concerned beforehand whether anyone would take it into their muddled head to, say, climb into the lion's area or something, but really with all the walking around you had to do between 3 oz beer samples, it didn't seem like anyone was in too bad of shape by the end of the evening. 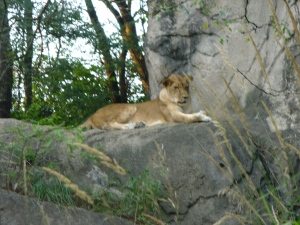 Brewers ranged from Aneuser Busch and Pittsburgh Brewing, through imports such as Hofbräu and Guinness, through smaller breweries like Dogfish Head and Brooklyn, to several tables of homebrewers. As has been the case at the Big Pour in the past, I think my favorite beer was one from a homebrewer – a lemongrass wheat beer which was very refreshing. And actually another personal favorite was another homebrew, a honey smoked stout, which was very dark and, well, smoky.

There wasn't a huge variety of food, but it was good for between-beer nibbles: hoagies, spicy chicken from PF Chang, mozzarella sticks, antipasto trays, cups of popcorn, hotdogs.

Pretty much the whole zoo was open… I did get a few animal photos before it grew dark. After dark it was pretty cool to walk along the trails or sit and listen to the music. I would say there should have been some more lighting for the brewers' tables though, since after about 9:00 you (or they) couldn't really see to pour.

Overall, it was an enjoyable event, but we think we'll choose the Big Pour next year, mainly because of the larger selection of microbrews and food.

5 thoughts on “Brew at the Zoo”