Quick Trip, as opposed to Whirlwind Trip, which was the December trip (down and back in one day, a whole 1/2 hour in the city).

Every trip must begin with coffee… we opted for the home-brewed Italian coffee this time. That means freshly ground espresso beans, stovetop Italian coffee maker, steamed milk, and cute mugs from Italy (these ones are Ciao and Uffa). M.m.m.m.m.

We got on the road about 9:30, after stopping at the bank for Alex to finally deposit his paychecks from working over break. We decided the last time that we prefer the 79-to-68 route over the PA Turnpike. This way we get to pass interesting things like "Noah's Ark Being Rebuilt Here!" as opposed to the backs of semi-trailers the whole time. Not as many trucks take this route because of all the steep grades and sharp turns (for a 4-lane). Of course it also gets pretty nasty in bad weather; 68 is the only road I've ever been on where I literally had to open the passenger door and lean out to see the white line to navigate. The weather wasn't actually bad this trip, just annoying (showers off & on). 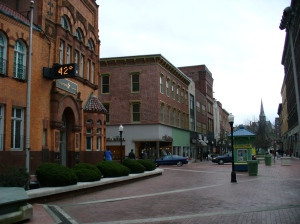 Since we left later than usual, we ended up in Cumberland MD at noon, so we got off there for lunch. Once we figured out how to actually get to the downtown area, it turned out there's a very nice pedestrian city center (along with an inordinate number of banks). We parked in the Center City Parking Garage (for 50 cents an hour), and walked to the Baltimore Street Grill.

It's a pretty place, still decorated for Christmas, with a long bar, and sort of New Orleans-themed decor for some reason. I had a Bayou Burger, which meant it had barbecue sauce, cheese & bacon on it, very tasty, with quite good onion rings on the side. Al had a fried fish sandwich, and Alex had a meat-lover's pizza (surprise). Afterward, we headed next door to the Daily Grind for (what?) more coffees, good ones too. I also picked up a vegan Explosive Espresso Chip cookie (by Alternative Baking Company), because it looked really good, but it was only so-so (I mean, not bad, but the package had promised the best cookie in the galaxy, so perhaps my expectations had been raised too high… ).

We got into DC around 3:30 (no traffic snarls for a change), dropped Alex off at his dorm (had to go in through the adjoining building and wend our way through random conference rooms and back doors to get to his Hall, because we were apparently early), and then drove further in Massachusetts Avenue to the Inn at Dupont Circle. (Read more details here.) After figuring out the parking garage thing (park illegally to get a pass, drive a couple blocks to the garage, make ourselves understood to the attendants, walk back in the rain), we relaxed in the room for a couple hours. That is, Al crashed, and I read the Washington Post.

Alex called us when he got hungry around 6 (I mean, we had said that's what we were doing), so we got the car again, and went back and picked him up. I had told him to find someplace to eat online, and he came up with Neisha, since we were going to Tenleytown for his supplies anyway. (Read more details on Neisha here.)

After dinner, we decided to do his grocery shopping before going to Robek's for smoothies, because I wanted to go to Whole Foods instead of Safeway. I had never been in a Whole Foods before, if you can believe it, and oh my, I want one near home (the closest one is about an hour away). We told Alex we would spring for his initial fridge/pantry stock-up, since we were in the expensive store, so he got some good healthy munchies and drinks. We got some stuff for ourselves, too, while we were at it. Also, I bought a nice fabric shopping bag to add to my grocery shopping collection, and the whole purchase price went toward local hunger relief (bonus!).

Unfortunately, when we went to Robek's afterward, they had closed 5 minutes ago, so we didn't get to sample that delicacy, after the build-up we'd been hearing from Alex all evening. Or maybe it's just that he always has coupons for free smoothies that makes them so good…

When we took him back to his dorm, we said that when we were waiting for him to come out earlier, we had seen another student go in the door to his Hall (rather than the convoluted way), so we tried that. His card worked fine, and the door opened, but a guy appeared from nowhere to tell us we couldn't go that way (though we just had), and we had to go back out and around. So we went outside, and saw the guy get in the elevator, so we snuck through again, and made it this time (good example we're setting for our child, I know, but seriously if there was some real reason they didn't want people coming in that way yet, they could have just turned off the card reader).

After unloading and sorting groceries, we said our good-byes :~

We went back to the B&B (again, details are here), and after breakfast we headed home through more rain.

So now here we are alone again, both kids back at school. Dinner when we want, clutter gone from the bathroom counter, no doors slamming at 2 am, reasonable grocery bills. But also, of course, we miss their smiling faces, movie- and hockey-watching companionship, sparkling dinner conversation, and constant activity. ❤

Bittersweet, I think is what you call that.