Thursday night we got back to Camp around 5:00, and our little team arranged to meet at the front door at 6:00 after making ourselves presentable. Janis declined the dinner invitation because she said once she showered, she'd want to get into her jammies and stay put, which is certainly understandable.

We had asked around the day before to find out where might be a good place to have dinner that wasn't too dressy, and was within walking distance. Danica and the others from Bethesda had gone the night before to a seafood place that they recommended, so we got directions (down the alley, run quickly across 4 railroad tracks! and it's just there).

So the seven of us headed to Taranto's, a little storefront seafood bar. Yummy, as you can see! A one-page menu listing specials and combos of Po-Boys (hot seafood sandwiches!), and broiled or batter-fried catfish, crawfish, grouper, shrimp, and many more! And oh so Gulf Coast fresh! There were even some burgers for Martin (not a fan of seafood). And beer, too :-)  Our waitress was Lorraine, very cute and fun, taking all the Duanes in her stride…

After a bit, the Bethesda folks (Danica, Gene & Rob) joined us too, even though they had just been there the night before. More putting of tables together and general raucousness. I had a Po-Boy special, which was half a catfish Po-Boy and a cup of gumbo (and a couple Heinekens). Al had a boiled shrimp platter, which came with potatoes and a half an ear of spicy corn (and a few Michelobs). All for $30. I definitely recommend this place! 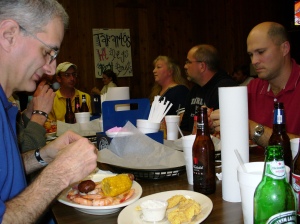 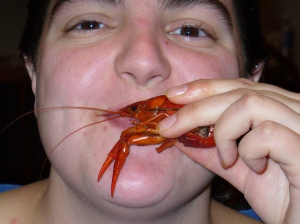 There wasn't any type of dessert on the menu, so we asked Lurleen (I mean Lorraine) for a recommendation, and she suggested Quakes, an ice cream place "just across the road". Not such a big deal if we'd had a car, but without one, we had to walk several blocks' distance (no problem) and scamper aross 4 lanes of Rt 90 traffic. 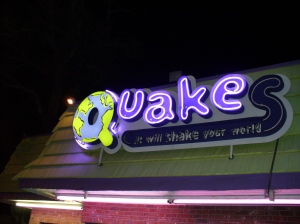 It did look like a nice little ice cream stand, and it was still pretty warm out (light jacket weather, warm to us northerners), so we went in to order. Duane and Martin had headed back to Camp after dinner, so there were 8 of us at this point. The sales clerk took each of our orders and rang it up, before starting to make anything. I ordered a cappucino, and Al ordered some sort of frozen coffee thing (similar to a DQ Moo-latte).

Everyone else ordered something, and then she got to work, one at a time. There was another young man in the back too, but we couldn't tell what he was doing. It just seemed to take forever, and we were served in no particular order, so that by the time the last person got their ice cream (which was one of the first orders and one of the simplest we thought), almost everyone else was done eating.

Ah well, it gave us more time to spend with each other…

Gene's Blackberry and text messages from Alex kept us up to date on the Pens game throughout the evening (won in a shootout!).

And, yeah, that was pretty much it for our big night out. We were all pretty beat, so we got back to Camp by 9:00, found out there wasn't to be a meeting that night due to Pastor Larry being zonked out, and went and zonked out ourselves after a full day of work and fun.