Breakfast was corned beef hash and eggs, quite tasty, though a couple people told me they were told to stay away from the hash (due to possible problems later in the day…), but no problem. And oatmeal again as usual.

The weather report called for some rain Friday, and cooler temps; it was kind of overcast and a little cooler, but it never did rain, so we lucked out yet again. We were able to get going even earlier yet this time, since we really knew what we were doing now. 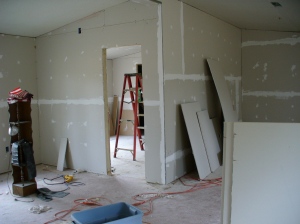 Coming to the end

We got right to work as soon as we got back to Karen's house… me, Karen & Janis (still) filling screw holes and mudding some joints; Al and Duane still doing corners, Steve helping the Wisconsin drywallers who were coming down to the end (and using up all the little scraps, until Steve came across some big sheets somehow), and Frank and Martin in charge of window jambs, which was fairly entertaining from an innocent bystander's perspective 😉

We were really getting to know the team from Wisconsin pretty well by now, and had a nice talk over maps of our respective states about where we were from, and what's nice about it. 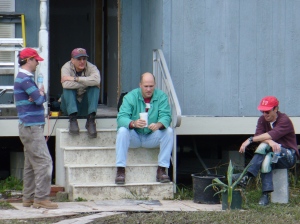 The Wisconsin folks got as far as they could without more sheets of drywall, packed up their tools (and electricity – they had the long extension cord and octopus we were all using to plug everything in), and headed out in mid-afternoon. We decided to head back shortly thereafter, since we did want to have a little free time during daylight hours on this last day. We made notes of what still needed done that had been in our original scope, mostly just mudding some more joints and corners, and some of the areas the drywallers had done right at the end. We felt like we had gotten a lot accomplished in the 2-1/2 days we were there though. 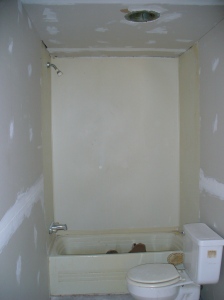 On the way back to Camp, we pulled in at some sort of buddhist/hindu garden we had noticed earlier, to take a closer look. (Please excuse my ignorance – if anyone knows what this really is, please let me know and I'll acknowlege it in an update). It just seemed out of place in the Mississippi backcountry. There was a nondescript concrete block building, with no outward sign as to what it might be, but it appeared through the window to be an open space inside, and there was a parking lot, so we were pretty sure it was something akin to a church. And then there was this beautifully ornate display outside, with what appeared to be some incense holders.

When we got back to Camp, we hauled in all our tools and equipment, and had the tool guy check it in… hurrah! we weren't short anything!