We drove to the Hotel Madera (very easy to find, about 1-1/2 blocks off of Dupont Circle), and everyone waited in the car parked illegally while I ran in to find out what we were to do with the car. The desk clerk called for the valet, because apparently that's the only way to park, besides taking your chances with finding a spot on the street (basically nil). But luckily (and here's the cool part!) because we drive a hybrid car, the normal $35 overnight valet fee was waived! That's just one of the eco-friendly aspects of this hotel (and apparently of the whole Kimpton chain), that I really liked.

I really liked our room itself, as well – very stylish and well-appointed. 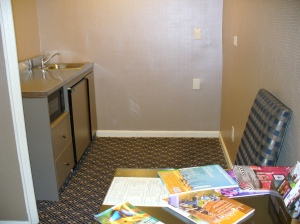 Amenities: Aveda toiletries (rosemary-mint shampoo, and the like, mmm), leopard-print bathrobes (and for-purchase PJ's in the closet), nice little kitchen and office space, complimentary goodies (wine at 5:00 [which unfortunately we missed], cookies & milk at 10:30 [a little disappointing to find cookies meant Oreos though], organic coffees & teas in the morning), a decent selection of magazines in the room (including Body+Soul, one of my favorites). Parking is valet-only, but as I mentioned above, it was free to us, and in any case included in-and-out privileges upon just a call to the front desk, so it was fine for a city hotel. Another nice feature was that after I made my online reservation, I received an email offering $5 upgrades if they were available when we checked in (for example, to a "cardio" room which included a stationary bike, or an "entertainment" room which included more of a home theater arrangement). Free wireless internet, though we didn't have any computers with us. I'm giving it a 4.5.

Aesthestics: No question – a 5 – just look at their website and especially the Virtual Tour link for an idea of the coolness of the decor. I absolutely loved it!

Sleep Quality: The beds were very comfy, and the feather comforter and pillow didn't hurt, either. We were on the 6th floor, so I can't speak for the lower-level rooms, but we heard no street noise that I can recall. 4.5

Food: Well, it's not a B&B, so no free breakfast, but we did have Easter Sunday brunch at the attached hotel, the Firefly (post later), which was very good, so I'll count that. And actually there was a note on the menu that said something about a Hotel Madera voucher being good for a continental breakfast, so maybe on the weekdays there is a free breakfast. 4 on the food.

Location: I see I had given the Inn at DuPont Circle a 4 on location, but that's mainly because all we were doing that trip was taking Alex to school. This time we also wanted a good selection of dinner restaurants and proximity to the Metro for a trip into the city, so I'm giving it a 4.5.

Staff: All the desk staff, the valets, and everyone we came into contact with were very friendly and helpful. I had called the hotel Friday to ask if they knew where we could eat on Easter Sunday, and they suggested their restaurant of course, but also when we checked in, there was a 2-page printout of other local restaurants serving brunch on Easter, which I thought was thoughtful. They were able to direct me to the nearest drug store, and I heard them finding somewhere for another guest to catch the Man U match on Sunday. 5 for the staff.

Value for the $:  Our room was $149 for 3 adults with 2 queen beds, which I thought was very reasonable for DuPont Circle. It was less than the Inn at DuPont Circle, which I didn't like quite as much, and a little less than Kalorama Guest House, and less than half of what we paid per night on Long Island in December. So I'll give it 4.5

Overall score is 4.6 – I highly recommend the Hotel Madera (and I already have told everyone I know how great it is). We would definitely stay there again, even though it's not a B&B which is normally my preference. Not only that, but I would definitely like to try some of the other properties in the Kimpton group. I put my business card in a dish to try to win a free night, and also filled out their online survey after we got home which makes me eligible for a 2-night stay, so it would be nice if that works out.

One thought on “Hotel Madera”