It’s been 6 or 7 years since we visited my sister L, who now lives in Naples, Florida, but with some Delta miles to spend, and with my other sister C and her family (husband K, teenage daughter E, and pre-teen daughter J) planning a Fall trip to Disney World (from Germany), we decided it was about time we did!

Our trip began rather inauspiciously, when A got an alert from the Delta app as we were having coffee at the Pittsburgh airport, that our first flight to LaGuardia was delayed by 20 minutes, cutting our already “pushing it” connection to “not likely at all”. But a quick conversation with the nice Delta agent at our gate got us switched to a flight through Atlanta instead, just about to board, which got us to Fort Myers almost 2 hours ahead of schedule!

That meant: time enough to meet L for a couple beers before “the Germans” arrived from Miami! She drove over to our motel (The Mariner, more on that later), and we walked the block or so to Old Naples Pub. L wanted to sit inside in the coolth, but we just-off-the-plane northerners overrode her and asked to sit outside in the tropical warmth 🙂

We hadn’t actually eaten lunch yet, though it was after 3, so we ordered some chips & artichoke dip, and a fruit & cheese plate, just hit the spot. We also had to try the Coastal Calamari (“drizzled with sweet chili glaze and sprinkled with black and white sesame seeds”), though we weren’t sure if the name meant that it was from this coast, or just coastal-style… but it was a really tasty way of serving it. I always like to try to drink as local as possible, so I tried a Weizen from Naples Beach Brewery, which was really very good, very true to style. We had a nice time catching up with L, and checking in via MLB.com as our Buccos were creaming the Cards in game 2 of the NLDS. #RaiseIt

We  still had some time to kill before the Germans were due in, so we walked the whole block from our hotel to the beach, and took a nice stroll southward. I found a bunch of really cool clear disc-shaped shells… I just need to think of something to make with them! 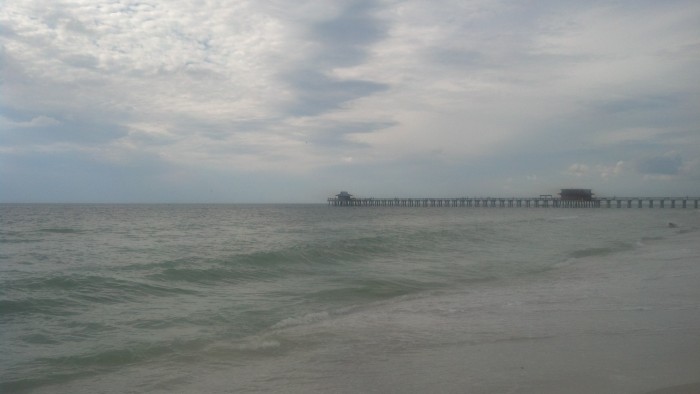 After the Germans arrived and got checked in, we all met at Ridgway’s for dinner, which was really very good, as well as being great to relax and talk with my sisters and their families. I had a cup of gazpacho, and the goat cheese tart appetizer as my meal (“Goat Cheese Tart with Ratatouille ~ Artisanal Greens, Roasted Tomato Vinaigrette”… SO good, the crust especially!). I paired it with a glass of Dog Point sauvignon blanc from Marlborough — getting myself ready for later this year, which will be our 3rd summer 😉 — and left room for the raspberry Crème Brule and an espresso.

Poor J was falling asleep in her chair after being up since 4am German time, so C took her back to the motel before dessert. A & I, and K & E, decided to walk out to the end of the pier before going back to the motel, as the Germans hadn’t had a chance to get to the beach yet. It turned out to be pretty exciting, because there were a lot of people night-fishing there, and two guys hooked and reeled to the pier the same (quite large) shark! Made us think twice (but only briefly) about going swimming nearby in the days ahead…