Our bus took us through Gulfport and Biloxi, along the beachfront, so we could see the progress, or lack thereof, that's been made since we were here a year ago. See for yourself. 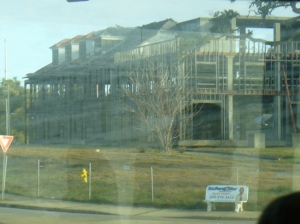 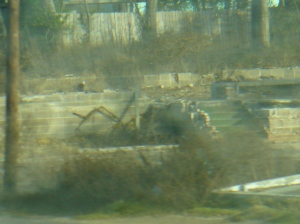 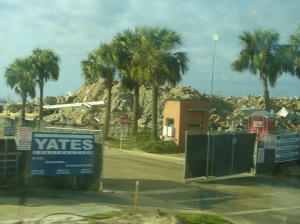 I apologize for the quality of the photos, as they were taken from a moving bus. But you get the idea.

Click here for my photos from a year ago. We could see that there were a number of new buildings since last year, though as you can see, there are many which are still just wreckages. It also appeared that there were more that had been completely cleared away - we noticed more excavation equipment on the various lots throughout town. The church steeple which was sitting amongst some rubble in last year's photo is now set up as a memorial beside what will be the new church.

But of course, the most noticeable new construction is the casinos – we were told that they were mostly back up and running (on dry land, rather than offshore as they were originally required to be) within 6-8 months after the storm, sucking local folks' money into the large gaming corporations based elsewhere, as local businesses watched their entire livelihoods crumble around them while they wait/ed for insurance money.