This year for the church Mardi Gras party, we were going to make gumbo instead of jambalaya, but then we saw them making muffalettas on Bobby Flay’s Food Network show, so we thought that looked like more fun – especially since Rose was still making jambalaya. We decided one soup was enough, what with all the hot dogs & wings and such that we always get for all the kids. So we tested the construction of one muffaletta for dinner last Tuesday, and then went to Cappello’s Deli yesterday morning to get the really good stuff (we considered making a trip to the Strip, but then we figured we could probably get just about as good here, since that’s where Cappello’s gets their meats and cheeses anyway. The sandwiches went over much better than we’d imagined they would!

First, make an olive salad. This recipe is a combination of one from Emeril’s “Prime Time Emeril” book, and a recipe Al found online at recipezaar.

1 cup green olives, chopped (we made Tuesday’s test run with green olives from Giant Eagle, but then Cappello’s didn’t have green ones, and I didn’t want to go anywhere near Giant Eagle on pre-Super-Bowl Saturday, so we got some nice purple olives, though we had to pit them. I think the idea is to have a couple varieties – differing levels of sweetness/bitterness)

freshly ground black pepper to taste (well, actually everything is to taste!)

Mix everything above. This can be made ahead, and it’s actually probably better if you do, to allow the flavors to blend.

Start by slathering olive oil on both insides of the bread.

Then the first layer should be a meat… this is mortadella. By the way, I honestly don’t think it matters which meats and cheeses you choose, just all good-quality Italian varieties.

Next, spread a generous helping of the olive salad you made. The recipe above made enough for 5 of these large sandwiches.

Then I used an aged provolone, which didn’t slice very well, but so what…

Then pieces of sweet sopressata (you could certainly use hot, but we didn’t, since we knew it was for a function where there would be people who weren’t as used to hot food as we are…)

Next, prosciutto – oh my, it was such a good piece of prosciutt’!

And last, some mild provolone – something that can melt nicely should go on top. Then put both the layered sandwiches AND the tops under the broiler for a couple minutes, till the cheese melts somewhat, and the bread toasts a little. 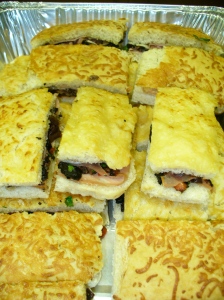 Then put them together and cut into smaller sandwiches. Mmmmm.

I’m normally not much of a meat eater, but good Italian deli meats are a completely ‘nother story…

Oh, and here’s a photo from the partay…

Brandon & Rose each found a baby in the King Cake, so they were crowned King & Queen.

One thought on “Vegetarians, avert your eyes…”