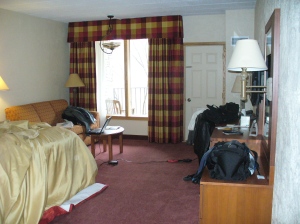 The management team at Al's company is having a retreat this weekend at Seven Springs, and spouses were invited, too – so here I am, with a morning to myself in this lovely room, while they have their meetings…

Last night we got in around 6:00, and everyone met in one of the meeting room for drinks and social time till 8:00. Two glasses of wine were definitely enough on an empty stomach! Then we all went to dinner at the hotel restaurant… very nice. There was a seafood buffet, which several people opted for, but I had a dish from the menu of chicken & mushrooms over black pepper fettucine, which was very tasty. There was a dessert buffet, from which I chose a creme brulee – at least that's what it sort of was, except the topping didn't seem to have been "bruleed" so to speak – it was just sort of a granular brown sugar kind of thing, but it was still tasty. Al suggested maybe they'd run out of propane…

The room was pretty comforable, though a little overwarm – Al got up in the night to turn off the heat, but we were tempted to open the balcony door to let some of the 40-degree cold in! And the pillow was a little too thick for my neck. But otherwise it's a very nice room.

This morning we went to the breakfast buffet at 7:00, and then the "men" (since that's all there happen to be on their team) went off to their strategy meetings. I'll go back down to the restaurant at noon to meet them, and then while they have more meetings I'll be off to my spa treatment at 1:00! We wives were each allowed to choose a spa package; the one I picked is called "Down to Earth Mountain Experience", and includes a "Eurostone Facial" and an "Earth and Stone Foot Treatment" – I chose that one because it sounded interesting with the stones and herbs and all like that.

Here are some views from the balcony of our room on the 9th floor: 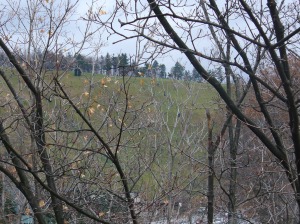 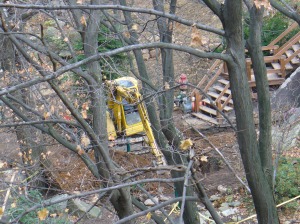 There are a lot of renovations going on here, which they'd better hurry up with – skiing season starts pretty soon!